I had the opportunity to attend the first year of the Okeechobee Music and Arts Festival in Okeechobee, Florida. Before I jump into the music, let me just mention that I drove about 50 miles down a single lane road into the center of Florida and when I arrived at the venue, it was like a magical world in the middle of the woods. There was a lot of thought that went into planning for this, so much attention to detail, down to the last twinkling light strung through the trees and hand painted designs on nearly every paintable surface. The whole thing was a beautifully put on production and very smoothly run. Here I am going to recap a bit from all three days, and look out for full reviews of the best shows! Check out my full photo album from Okeechobee here!

Sometimes the mellower, experimental music isn’t such a great genre to see live, but I’ve been listening to Youth Lagoon for a while now especially when I’m drawing, or painting, or just anything creative; it really sparks my imagination. The crowd erupted into cheers as “Cannons” began, and in a few of the instrumental sections of songs, front man Trevor Powers made his way around the stage thrashing about in a tantrum-like fit. He kept up humorous banter between tracks with mentions of his mother’s homemade cookies versus Oreos, and the difference playing Florida, when they were just in Russia three days prior. The only thing that disappointed me was a group of overly exuberant girls right behind me talking through the whole set; if you’re gonna stand in the crowd, be there for the music instead of talking over it, and being disrespectful of other’s experience. He finished the set with “Dropla” and a mic drop during the little tantrum dance around the stage at the end. Trevor started making music as Youth Lagoon in 2011, released three albums, and as of this past February, announced the end of Youth Lagoon; I sure hope it’s not the last of Trevor’s music.

Now for the band I was most excited to see, Mumford & Sons. I should preface this by noting that they were only letting a certain number of photographers in the pit for their set, so I camped out in a front row spot for five and a half hours; this meant so much. The came out onstage to a crowd of thousands and calmly began “Snake Eyes” under the ghostly blue lights. I have never experienced so many people all singing along to the same song. They followed with “I Will Wait” which had everybody dancing and bouncing in the limited space each person had in such a crammed audience. Before starting “Awake My Soul,” Marcus said “we’re gonna sing one together right? Its fucking easy,” and instructed the crowd on the chorus. He mentioned how weird it was to be playing a festival in March, and addressed the whole Trump deal; “Also what the fuck are you thinking with Donald Trump!?” He also called Trump a name that should not be repeated, and dedicated “The Cave” to him. Marcus played drums on “Lover of the Light” and “Dustbowl Dance” the latter of which ended their set . . . But wait there’s more! 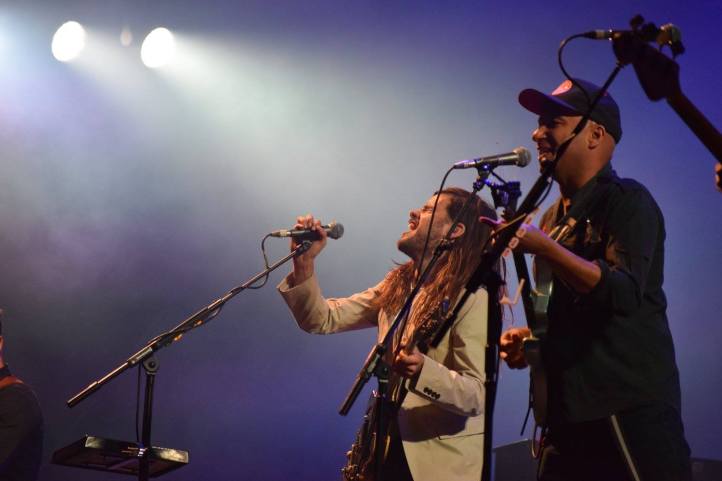 They came out for encore with famed guitarist Tom Morello, The Avett Brothers, and Preservation Hall Jazz Band and covered “House of The Rising Sun” “You Really Got Me.” Winston Marshall took the Marcus’s mic to do “You Shook Me All Night Long” prefacing it with “tonight I’m gonna be the Bee Gees doing AC/DC!” And boy did he deliver! After that cover, Winston spoke with Marcus and came back to the mic with “well, I’ve just been fired from Mumford & Sons [. . .]” and continued with a funny little thank you speech. Their guests left the stage, save for Tom Morello, and they thanked everyone again, and thanked the creators of the festival for providing such a “collaborative atmosphere” before they signed off and closed Okeechobee Music & Arts Festival with an expressive rendition of “The Wolf.”